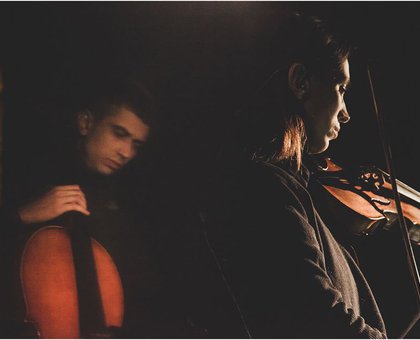 "please leave your message after the tone"
piece for violin, cello and electronics.

In 2019, he graduated from the Academy of Music in Wrocław under Cezary Duchnowski. His activities as a composer are focused mainly on instrumental chamber music, electroacoustic music and electronic music. In his works he concentrates on searching for interesting sound structures using unconventional sound extraction techniques and live electronics. Bednarczyk’s stylistic interests revolve around noise, glitch and club music. He often incorporates performance and visuals into his acts, including stroboscopic effect and lighting control. Bednarczyk is also an active performer of his compositions. He performs his own electronic music as the one-man project LOUFR. The musician is also a member of the Sound Factory Orchestra, in which he is responsible for the production of audio and electronic music. Bednarczyk is also a member of the Wrocław-based Wkurvv collective, whose main activity is the popularisation of experimental electronic music. His works have been presented at such festivals as Warsaw Autumn, Musica Electronica Nova, Musica Polonica Nova, CROSSROADS, Słuchalnia, Muslab, New Music Week, GAIDA Festival, Idealistic Festival and SNIM. He has collaborated with NAMES Ensemble, Ensemble Adapter, Garage Ensemble, Sound Factory Orchestra, Ensemble Kompopolex, Ensemble Synaesthesis, SNIM Ensemble, Trio Layers, Ars Nova Ensemble, and Ensemble s201.

Currently based in London, Kristupas Bubnelis represents the youngest generation of Lithuanian composers. He has written music for symphony orchestra, chamber ensembles and solo instruments. His composition “Hammers without a piano” earned him the first prize at the competition of new piano pieces hosted by the Lithuanian Composers’ Union (2016). His music has been performed in Austria, Denmark, Indonesia, the Netherlands, France, Germany and the United Kingdom. His academic achievements in London have been marked by the G. V. Turner-Cooke Composition Award in 2019 and the Arthur Hinton Memorial Prize in 2017. He has been a keen participant of composition seminars and master classes led by Oliver Knussen, Magnus Lindberg, Bent Sørensen, Georg Friedrich Haas, and Hans Abrahamsen. In 2017, he was invited to the Crossroads Festival of new music in Salzburg, Austria. In addition to composition, he works as an event manager. Together with other artists he organises stage performances and contributes to the popularisation of contemporary Lithuanian music abroad. In 2019 he was the key producer of The Chain of Freedom: Baltic Sounds in Focus, a string orchestra concert in London aimed at introducing the most noteworthy current composers from the three Baltic nations to the British audience.

Twenty Fingers Duo is a string ensemble created by brother and sister who see new experimental music as their primary target, but are also keen to take part in the projects involving other genres. Although it was quite recently that cellist Arnas Kmieliauskas started performing with his sister, violinist Lora Kmieliauskaitė, they are a “ticking” duo with a distinct creative prospect.
The ensemble has been behind the recent launch ofPerforma, the multimedia programme aimed at commissioning new works of music from composers who (de)construct new forms of performance. The initiativepoints to the duo’s resolute desire to look for new and even somewhat radical creative challenges.
Both Arnas and Lora are versatile and experienced performers and keen participants of international competitions, masterclasses and festivals held in Lithuania and abroad. They have played in a number of ensembles created for different artistic projects.
The duo has won multiple prizes both at home and internationally for their artistic initiatives and interpretation of music. (By Asta Pakarklytė)